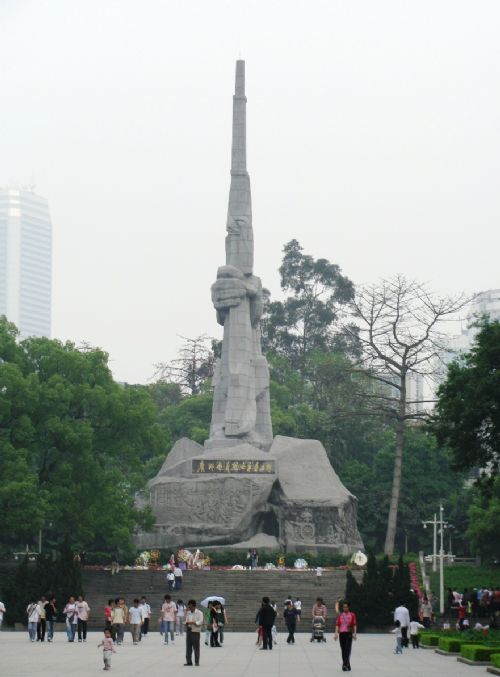 The Wuchang Uprising of October 10, 1911, started the Xinhai Revolution, which triggered the collapse of the Qing Dynasty and establishment of the Republic of China.

In 1900, the ruling Qing Dynasty decided to create a modernized army, called the "New Army". At the time, the city of Wuchang, on the Yangtze River in the province of Hubei, had the most modernized military industry, so it became the site where weapons and other military equipment for the New Army was manufactured. The revolutionary ideas of Sun Yat-sen extensively influenced officers and soldiers of the New Army in Wuchang, and many participated in revolutionary organizations.

The uprising itself broke out largely by accident. Revolutionaries intent on overthrowing the Qing dynasty had built bombs and one accidentally exploded. This led police to investigate, and they discovered lists of revolutionaries within the New Army. At this point elements of the New Army revolted rather than face arrest. The provincial government panicked and fled. Initially, the revolt was considered to be merely the latest in a series of mutinies that had occurred in southern China, and was widely expected to be quickly put down. The fact that it had much larger implications was due to the fact that the Qing dynasty delayed acting against the rebellion allowing provincial assemblies in many southern provinces to declare independence from the Qing and allegiance to the rebellion.

Sun Yat-sen himself had no direct part in the uprising and was traveling in the United States at the time in an effort to recruit more support from among overseas Chinese. He found out about the uprising by reading a newspaper report.

A sense of the Qing dynasty´s having lost the mandate of heaven may have contributed to the revolt. Evidence of the loss of the mandate of heaven, in China, often constitutes of natural disasters, such as fires and floods. The Yangtze overflowed its banks in 1911, and the revolting troops were, of course, situated near that river. Such a flood would have had a profound psychological impact on any government officials, rebels, peasants, and other Chinese in the vicinity, and the flood was a notable disaster, with 100,000 fatalities.

In Taiwan, the date of the uprising, October 10, is celebrated as a national holiday known as Double Tenth Day.