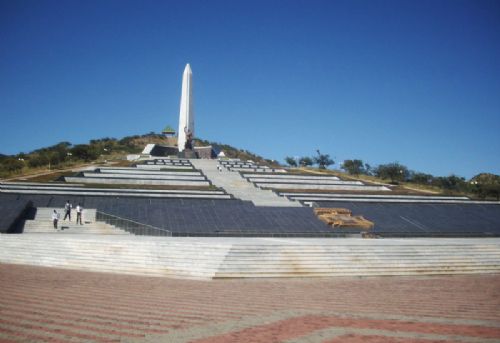 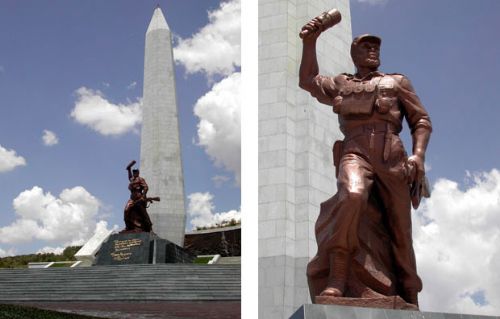 Heroes Acre, which was inaugurated in August 2002, could be described as Namibia´s national war memorial. It was designed by a North Korean firm: Mansudae Overseas Projects. Namibia experienced a number of uprisings and wars in the 20th century and the memorial is as much about commemoration of the heroes in these as a monument over Namibia as a nation and its leader Dr. Sam Nujoma.

This is a list of the wars and uprisnings from the excellent online book about Namibian history by Klaus Dierks.

About Heroes´ Acre
From the city of Windhoek Web Site

"The Heroes´ Acre is a modern, state of the art national symbol that was inaugurated by His Excellency, Dr Sam Nujoma, President of the Republic of Namibia on 26 August 2002. Its construction was motivated by the need to foster the spirit of patriotism and nationalism and to pass on this legacy to the future generation of Namibia. The Heroes´ Acre took 13 months to construct and it covers a total area of 732.9212 hectares. It houses 174 graves, is 286.70 meters long and has a width of 134.20 meters. It has a parking area of 9824.34 meters while a three-kilometer palisade fence protects the monument.
...
The site was identified and the City of Windhoek donated 732.9212 hectares of land less then ten kilometers south of the City of Windhoek to Government for the construction of Heroes´ Acre. A model with technical sketches was completed by a team of Korean experts with assistance by the City of Windhoek, Ministry of Basic education and Culture, the National Monument Council and the Ministry of Works, Transport and Communication. At its 13th ordinary meeting on 2 June 1998, Cabinet approved the appointment of a High Level Technical Committee to oversee and direct the construction of the Heroes Acre.
...
The Heroes´ Acre is situated between two hills and the design approach has accommodated the "Acre" on the northern slope of the larger southern hill to allow an ambient environment for visitors, while at the same time allowing easy access to the service and maintenance team.

A while obelisk, the tallest element on site, form a distinct vista, which is clearly visible from the City centre of Windhoek. White marble and black granite from Karibib on the edge of the Namib Desert, have been used to clad all the concrete structures.

The layout of Heroes´ Acre is a symmetrical polgon consisting of:

 a public seating area that can accommodate 5000 people
 an arrival platform which is the lowest part of the "saddle"
 the main area consisting of graves
 the obelisk area
 and a staircase walkway leading to the Pavilion, which allows for a panoramic view of the City of Windhoek

The main attractions at Heroes´ Acre are the Eternal Flame that will be burning 24 hours, the Heroes Medal, the eight meter tall Unknown Soldier and the curved relief depicting the struggle and the Pavillion. Other interesting features include the Gateway, the Sculpture couple on the roundabout and the restaurant

In his inaugural statement, President Sam Nujoma stated that ´The Heroes´ Acre is a place for all Namibians irrespective of their political, racial, ethnic or religious background to come and honour those sons and daughters of our soil who sacrificed their lives, and those who, during their lifetimes, made great and meaningful contributions to the liberation of the land of the Brave and all her people in their diversity. Compatriots, this monument was built as our token of honour to our fallen heroes and heroines. It was built in the true African tradition of bestowing honour to our forefathers and mothers´".