DRAFTS FOR A MULTILATERAL WAR MEMORIAL

The creation of a concept for a polynational war memorial and the task of formulating that concept in a brief, which would constitute the final assignment for the designers, is, to be sure, a task of high complexity. The brief would have to include the various demands that would need to be met in order for the monument to be appropriate for all the nations involved. Who shall decide what the demands are, what the concept is? It is easy to imagine a supranational organisation, such as the UN, appointing a commission to establish the concept for the memorial, a commission composed of representatives from the states involved. But the risk with such a process itself obviously entails a huge risk for the actual realization of the project. The issues are of such complexity, and the negotiating parties so numerous, that the establishment of such a commission would probably lead to exhausting political negotiations that would delay the project for decades, if not bring it to a halt without the production of even a single sketch. If only one nation rejected the process, the memorial could become obsolete, perhaps even counterproductive, if the breakdown of the negotiations fuelled further conflict.

There are several other ways to solve this problem that would avoid that devastating scenario. One is to let the competitors themselves present the conceptual solutions, instead of leaving them only with the task of designing it. It would hence be up to the delegates from the countries involved to select the best solution. It was the latter model that formed the conceptual base for the course "Drafts for a Multilateral War Memorial" that I held at the School of Architecture in Stockholm for one week in March of 2004. The course was a complementary but compulsory course for senior students.

The course assignment was for the students to present a draft, in their own choice of material such as drawings, blueprints, photographs, models or 3D models, for a multilateral war memorial. No location for the memorial was given and the task included proposing one, or multiple, locations for the memorial and describing how it could be accessed. The memorial could furthermore be located in an alternative space such as the Internet or other semi- or immaterial spaces. The design should also take into account the differences in aesthetic expression between cultures involved. It should also be possible to add new modules to the structure over time when new peace processes take place that demand new memorials.

It is of course not possible to present a full-bodied design proposal after only one week of work with such a complex assignment, but it was important for me that the students took on at least one of the issues concerning updateability, accessibility, locality and cultural difference in their draft. I also pointed out that the "rules" of the assignment could be transgressed if the reasons for doing so could be adequately explained. The intention with the course was to encourage the students to come up with their own solutions and apply them to their style of design. I found the resulting proposals to be highly interesting and I will present them below.

Kristina Cedrins proposal includes a series of strong healing elements. Black granite and water, the basic materials in her proposal, are very common in healing objects in the Western World where they appear in grave stones and monuments. It is as if the usage of these materials almost automatically makes us think about death and sorrow. The whole memorial is constructed as a procession walk that takes the visitor through a passage in the rock, out onto an open area and up onto a hill facing the sea. The interior walls of the passage through the rock display information about wars fought in the 20th century, the following open area is a water basin, or artificial lake, in which a labyrinthine path of granite slabs is laid out. Along the paths, monoliths are erected, one for each fighting nation. The last station is a viewpoint overlooking the sea in which a huge monolith in black stone is erected a short distance from the shore. By using separate healing elements, for emotions connected to national tragedies in the basin and the sole monolith in the sea for individual and cross-national remembrance, she creates a dynamic design for different sets of emotional expression that provides an excellent illustration of the tension that war creates between the state and the individual.

Samuel Lundberg's proposal is based on a simple form element that could be used anywhere in the world where necessary. The construction is a simple concrete slab, approximately 3 x 10 meters, with metal rings attached to its base. Several, perhaps hundreds of slabs could form a memorial site and anyone would have the right to occupy a slab to make their own war memorial. Memorials could be made by individuals or organisations and would then also be maintained by them. Consequently, the memorial would change over time when the slabs are abandoned by their owners and replaced by new ones. Samuel presented a thought-provoking solution to the issues dealing with accessibility, updateability and cultural difference, but, in addition, his proposal also shows how the concept of a memorial site can be democratised due to its cost-efficient design and the usage of simple materials. This type of memorial would perhaps never be commissioned by a state or supranational organisation due to its anarchistic principle of organisation, but it is perhaps not too farfetched to imagine that a global grassroots movement could promote the idea.

Anna Ros and Emma Lundberg worked together and concentrated on the usage of one healing object that would be common for everyone in the world. Their memorial is formed as a gigantic dish, as big as a football stadium, which would be placed in the middle of the Atlantic. This site could not be visited, but rather only seen from a distance, preferably from an aeroplane, above. The inner surface of the dish is covered with solar cell panels that collect energy in the daytime and output that energy during the night through spotlights that light the sky above it. This solution basically makes the memorial site maintenance-free. Anna and Emma's proposal solves the problem of accessibility in a quite interesting way. Since the object cannot be accessed by anyone as a public sculpture or building would be, the healing element must exist as an image in the minds of people rather than in physical space. To achieve this it has to be inscribed in the collective memory of people all over the world, and accordingly in the history of man. In my opinion the object would have to be even bigger than the suggested size, probably of gargantuan proportions.

Vello Pannel proposed a spherical construction or sculpture, in the form of a globe. His draft focuses on the visual effect created when the war memorial is updated with new information. The sphere shows all ongoing wars around the world marked with metal plates on the locations on the globe where they were fought. As wars would start and end, the shape of the globe would constantly change. Conflict-infested parts of the world would make the surface bulge and thus create an image of a mutating world. The healing moment in Vello Pannel's proposal is not personalized. It does not take place when the individual meets a healing element such as an inscription of a name. It manifests itself rather in a collective feeling of horror that the visitors experience in front of the image of a war-ridden globe on its way towards exploding from conflict.

Images: Kristina Cedrins, 2004. All images are copyright-protected and courtesy of the artist. Download the proposal as a PDF file. 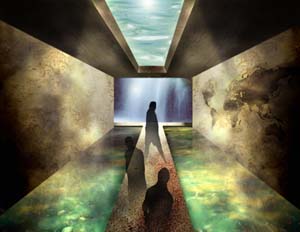 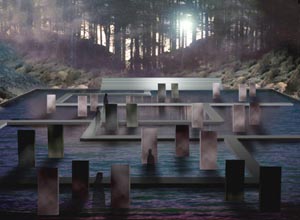 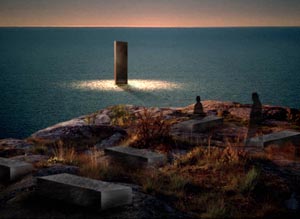 Images: Kristina Cedrins, 2004. All images are copyright protected and courtesy of the artist.