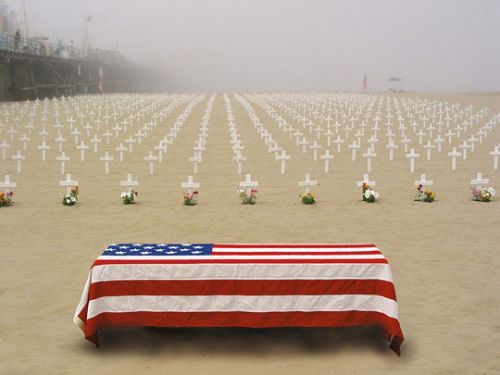 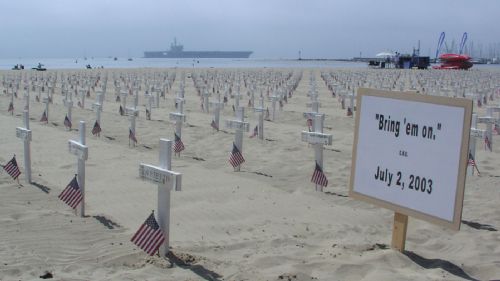 The original Arlington West memorial, Santa Barbara, California; the USS Ronald Reagan is in the background.

Tomb of the Unknown Soldier, and is also the final resting place for John F. Kennedy. Arlington West -- in a manner similar to "real" cemeteries -- is intended by the project organizers to be a place to mourn, reflect, contemplate, grieve, and meditate, to honor and acknowledge those who have lost their lives, and to reflect upon the costs of war.

The memorial in Santa Barbara, California, which was first put together on November 2, 2003, is installed each Sunday by a team of volunteers on the beach immediately west of Stearns Wharf. Visitors walking to the tourist attractions on the wharf have a clear view, from the boardwalk, along the beach with the white crosses in the foreground. From the walkway, visitors can see a flag-draped coffin and more than 2000 crosses, made of wood, which are intended to resemble and represent traditional military grave markers. In addition to the simulated graveyard, a placard listing all the fallen American military personnel since the U.S. invaded and occupied Iraq is prominently displayed; this list is updated weekly. Adjacent to the placards is a sign containing the message: "If we were to put up a cross for each Iraqi person killed, the numbers of crosses would fill the entire beach."

Although there is no way of knowing the various faiths or philosophies of the many people who died, the cross (a common symbol of Christianity) was selected to used as a marker.

The second Arlington West was installed in Santa Monica, California on February 15, 2004, a Sunday. It was built on the sand just north of the pier at Santa Monica Beach, "as a way to acknowledge the costs and consequences of the addiction to war as an instrument of international policy" (quote from Veterans for Peace). Like the initial memorial in Santa Barbara, it has been reinstalled each Sunday since its inception.

Similar memorials have also been installed on other beaches on the West Coast of the U.S.. The San Diego Veterans For Peace, Chapter 91, installs the memorial 6-8 times/year on beaches and parks in San Diego County.

For all details regarding dates and places for the memorial, please visit arlingtonwestsantamonica.org