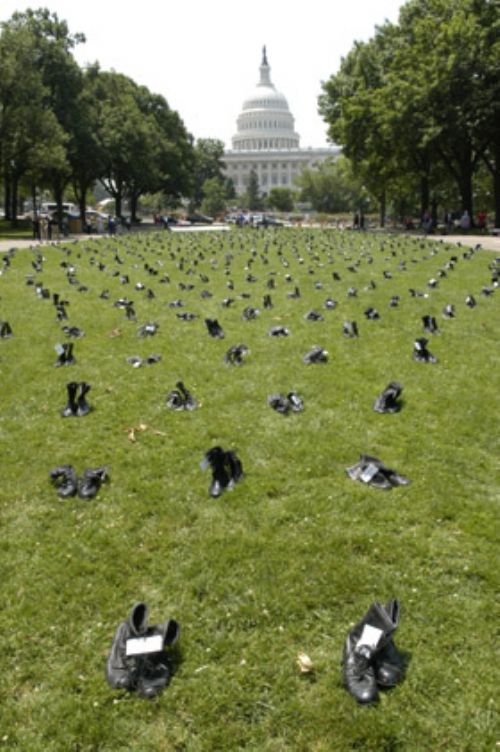 Eyes Wide Open is at the same time a travelling memorial and an information centre about the war in Iraq. It is made up of two parts, an indoor multimedia show and an outdoor exhibition. The former is described on AFSCs web page as "a multimedia, multisensory journey through the words, images, and sounds of the Iraq war. Visitors move through a vivid memorial to the wars soldier and civilian victims and a compelling outline of what the war is costing us at home, that informs of the situation in Iraq." The outdoor exhibition is a powerful installation of almost 1300 pairs of army boots and around 1000 pairs of shoes. Each pair of military boots commemorates a killed US soldier and has a nametag attached to it. Each pair of "civilian" shoes represents 16 civilian deaths on the moderate end of the scale (3). On a wall consisting of three eight-foot panels, approximately 3000 dead Iraqi civilians whose names are known are listed. On some occasions AFSC has also organised name-reading ceremonies in remembrance of killed US soldiers and Iraqi civilians.