It appears that there is a currently an upswing in Europe for high-profile architechtural projects that commemorate the Holocaust. If Daniel Liebeskind's "Jewish Museum", which opened in Berlin in 1999, was the project that paved the way, Peter Eisenman's "Memorial to Europe's Murdered Jews" (Berlin 2005), confirmed that the time was just right. Other similar projects are currently in progress. The Finnish architects Lahdelma & Mahlamäki recently won the competition for a "Museum for the history of Polish Jews" that will be built in 2008 on the site of the former Warzaw ghetto, and the Belgian city of Mechelen is planning to turn the Nazi concentration camp that was located in the city between 1942 and 1944 into a memorial site.

Why are these projects being realized now, when over 60 years have passed since the events took place? (compare with the US where the US Holocaust Museum was dedicated in 1983) I assume that there is currently, among many, a profound concern that the knowledge about the atrocities committed by the Nazis will go lost for coming generations when those that experienced the Holocaust pass away, a concern which is further deepened by current gains by the extreme right in Europe. Perhaps has the time passed also eased the underlying tensions between perpetrators, the silent non-Jewish population, the survivors and relatives to the victims in many European nations, a tension that in many ways has put a lid on the debate about the Holocaust.

The project for a memorial site in Mechelen was the main reason that W&K Sint Lucas College of Architecture in Brussels arranged an international architectural workshop with the title "Dossin-Mechelen: Thinking the future of symbolic places", which brought together around 140 master students in Architecture from over 20 European universities (none from Scandinavia though), around 40 tutors and visiting professors, and a series of lecturers on March 13-18. I was there too, invited to speak at the workshop about the "Polynational War Memorial" and to tutor a group of architect students.

So, what does this beautiful, historic town has to do with the Holocaust? The city was the first in Europe to build a railway and became the most important railway knot in the region, which was of strategic importance in the Nazis' plan to make Europe "judenrein", and thus the city became the first station for the Jews that were rounded up in Holland and Belgium. Around 25.000 of them were gathered in a concentration camp in Mechelen and from there deported to the work- and extermination camps in the east between 1942 and 1944. Few of them survived.

The building that was made into a concentration camp is still standing and is known as the "Dossin-kazerne". It used to serve as barracks for the Belgian army before being taken over by the Nazis in 1942. Today, three wings of the building have been converted into luxury apartments while the fourth, eastern wing, hosts a museum to the Holocaust and the resistance. A small memorial sculpture and a plaque at the eastern entrance are the only visible exterior signs that remind of the deportations. The eastern wing, a former prison across the road and a plot that connects it with a closed monestery are included in the plans for a memorial site. A competition for the design has already been intitiated but it may take years before a result is presented.

The main aim with the workshop was apparently to teach a younger generation of architects about the Holocaust but also, I guess, to create some input to the ongoing planning process for the upcoming memorial. It would anyway be a highly inspiring and immensly intense event. The excellently organised workshop kicked off with a series of speakers. Among them were the artist Esther Shalev Gerz and Dr Detlef Hoffmann as well as representatives from Sint Lucas, the Flemish Government Architect, the Jewish community and the city of Mechelen. I presented the Polynational War Memorial project in one the morning plenary sessions.

With these lectures and presentations fresh in mind and after a series of visits, most notably to the nearby concentration camp in Breendonk, the students were given a couple of days to complete the complex task to design a proposal for the assigned plot. The 16 students I tutored together with Kristina Kotov and Sophie Laenen, had opted for "mixed media" in their applications to the workshop. As an artist the term "mixed media" feels a bit dated to the late eighties and beginning of the nineties, which saw the emergence of installation- and video art, but in Belgian universities the term is used, if I understood it correctly, as a part of the curriculum that teaches design- and presentation techniques that requires all forms of electronic media. We would in any case form a kind of "experimental" or "media-art-influenced" group, and having that "label" I never expected that we would have anything to do with the selection process that was going on during the workshop. To my joy one of the mixed media groups however won the third prize with a very well tought, executed and presented proposal that included interactive and participatory audiovisual installations.

It is not easy to sum up a complex event such as this one, but after spending a lot of time discussing with the students, I sense that the legacy of the specific historic event known as the Holocaust or the Shoa, is bound to become more integrated with subsequent and equally atrocious events by coming generations. The Rwandian genocide showed the world that the Holocaust was not an isolated historic phenomenon and that attempts to annihilate all members of an ethnic group on a massive scale is an issue that has to be firmly dealt with in contemporary society. The experience of the Holocaust is indeed of great importance for an understanding of the mechanisms behind such atrocities.

The result of the five days of hard work and inspiring input did perhaps not deliver an answer to the ambitious sub-title of the workshop that requested us all to "think the future of symbolic places", but I am convinced that it started a process among many of those who participated. It definitely gave me a lot to think about. 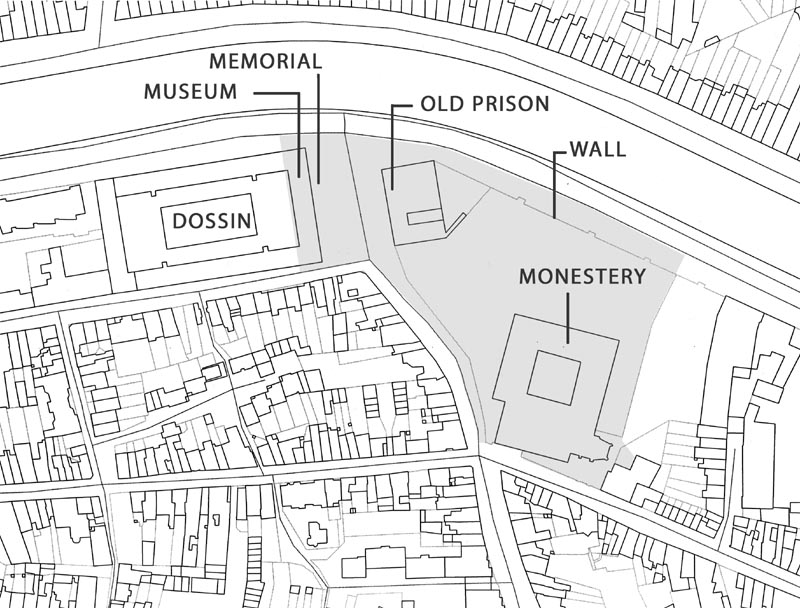 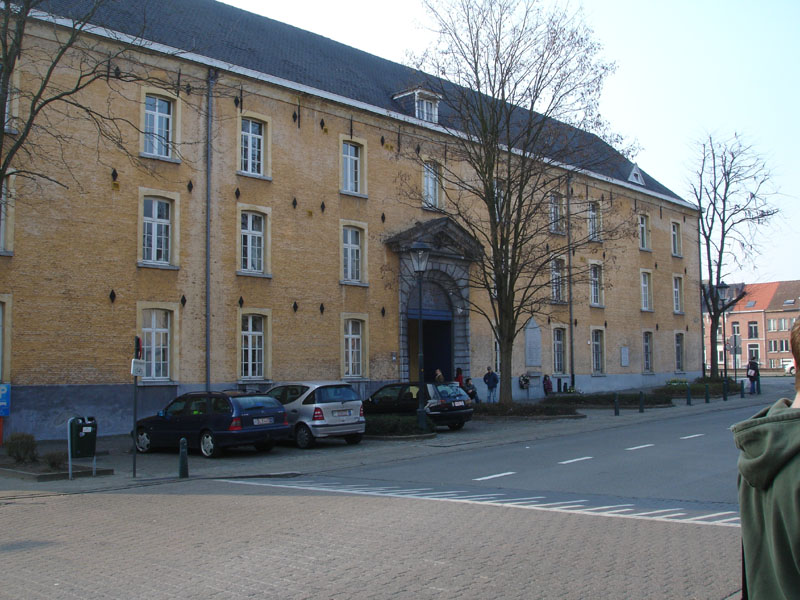 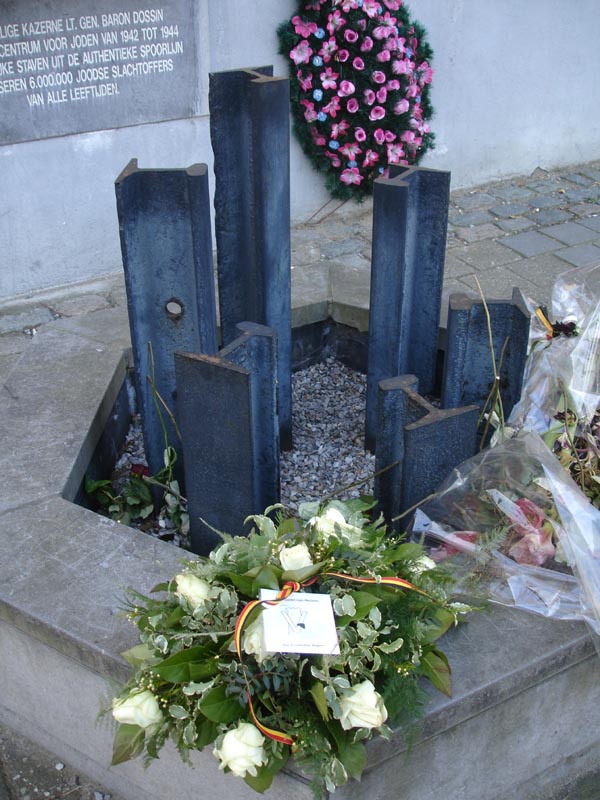 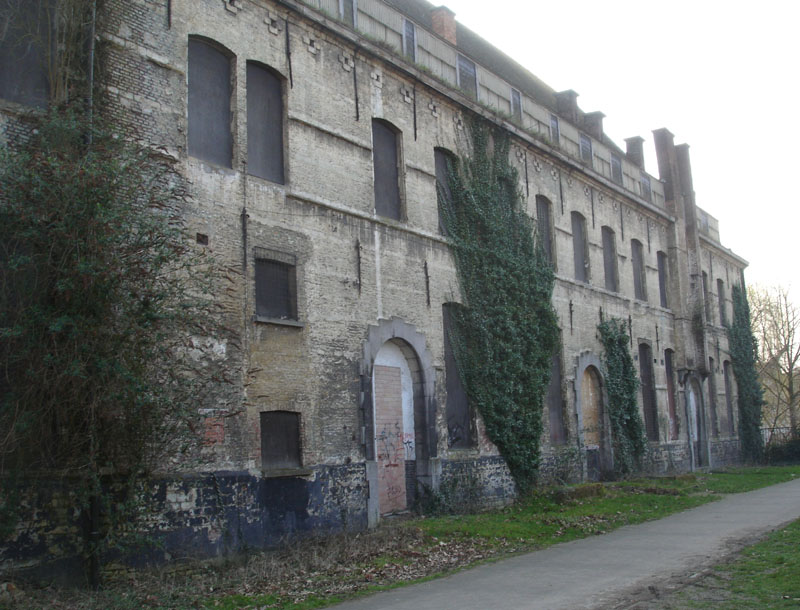 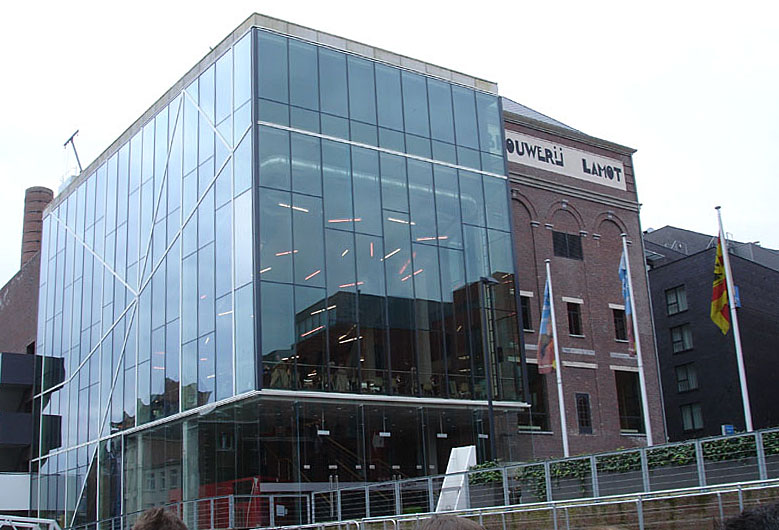 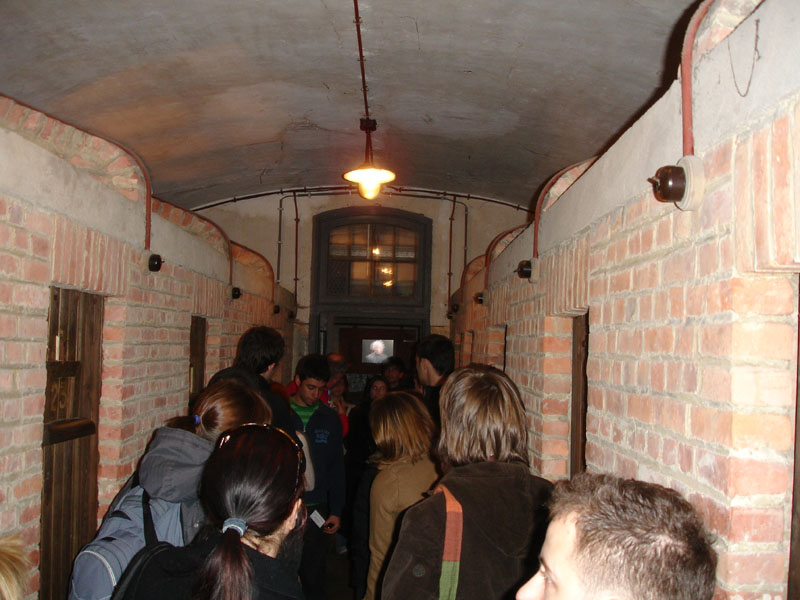 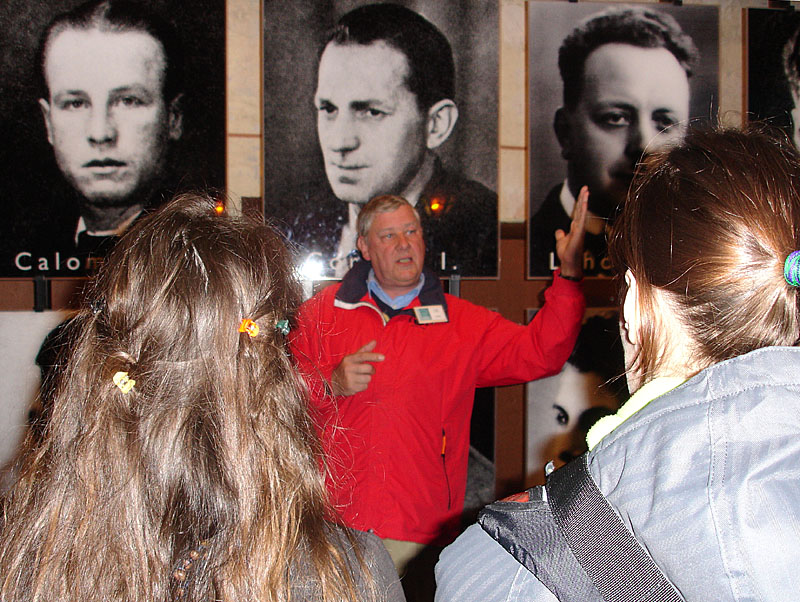 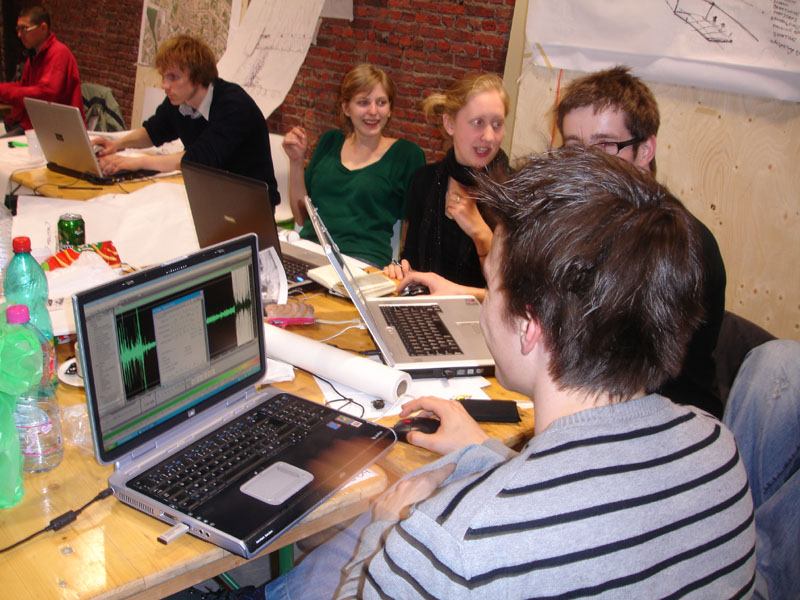 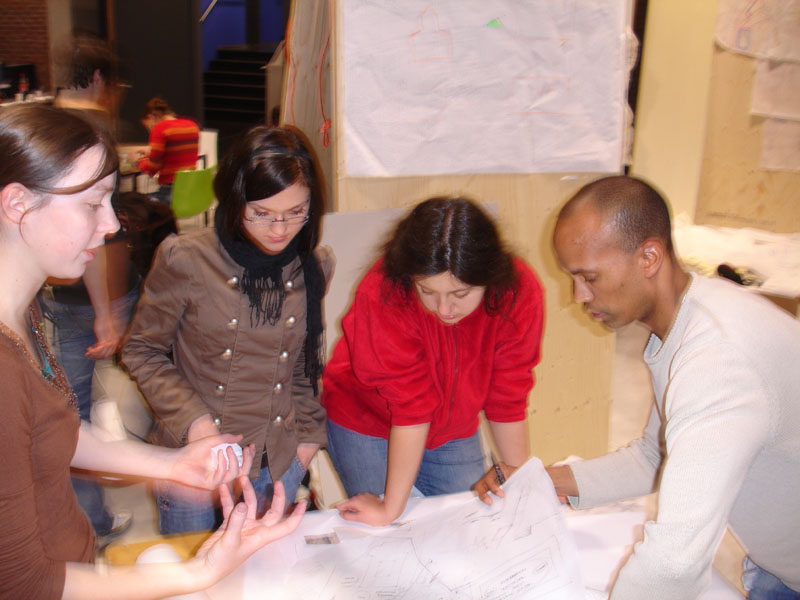 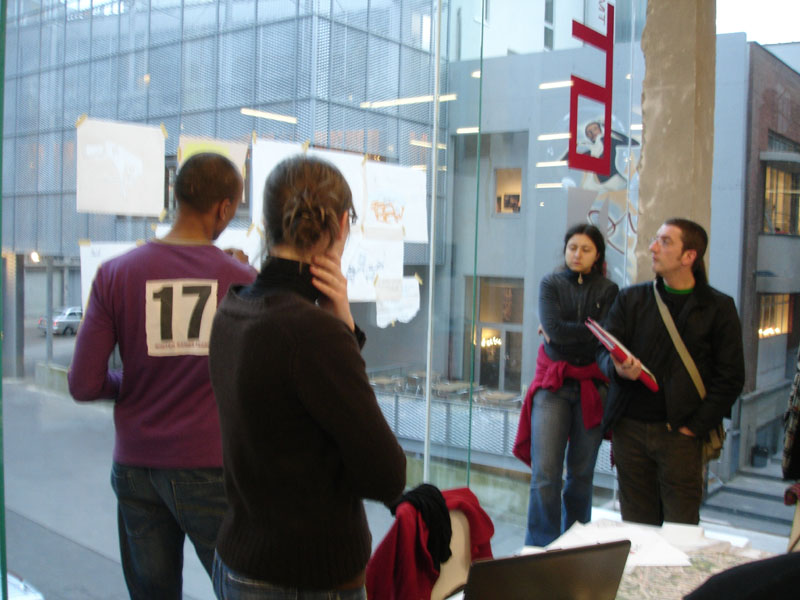 1. Map of the designated area for the memorial site (marked grey)
2. The Dossin
3. A memorial to the victims outside of the Dossin
4. The old, closed up, monestery.
5. Lamot conference centre where the workshop was held
6. Breendonk concentration and work camp
7. Breendonk concentration and work camp
8. Danielle, Fiona, Gordon and Rein of mixed media group 46a
9. Kelly, Patrycja, Anna and Shermel from mixed media group 46b
10. Shermel, Kelly and Anna of group 46b present their work to the jury
11. Gordon, Danielle, Fiona and Nevb of mixed media group 46a