Could you compare the tsunami catastrophe in the Indian Ocean with the war in Iraq? Some people may find this comparison tasteless while others are claiming that the war is a preventable man-made disaster that could have killed, wounded and displaced as many people as the tsunami during the two years that it has been raging. The country is now facing elections in the end of January in a severe state of chaos where even the most persistent aid organisations, such as Medicins Sans Frontiers, have left the country for security reasons.

There are organisations that have tried to establish the human cost of the war, sometimes under extreme circumstances. Others have used the data collected by those organisations in commemorative exhibitions and name-reading events in remembrance to killed civilians and soldiers regardless of nationality. We are now publishing two articles that are focusing on a handful of these organisations that have made an astonishing work in an effort to bring light to the cold facts of this man-made disaster.

The members of "The Iraq Body Count" have with a minimum of resources managed to deliver information about the number of killed civilians in the Iraq war to hundreds of thousands of concerned people, by using the internet and news reports available online. We have interviewed John Sloboda who is one of the founders of the project.
READ ARTICLE >>

The article "Cross-National Commemoration in the Iraq War" are focusing on two commemoration initiatives, which are both honouring the killed in the war in Iraq: the touring "Eyes Wide Open" exhibition and the name reading ceremony "Naming the dead" in the UK and other countries. The detailed casualties lists that was used in these commemorative initiatives is in part the result of the hard work done primarily by the US based organisation CIVIC in cooperation with a Iraqi research group, a work which will also be covered in this article.
READ ARTICLE >>

These articles relating to the war in Iraq were published in december 2004. 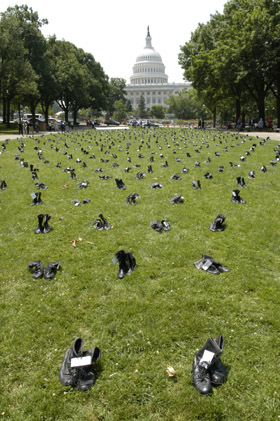