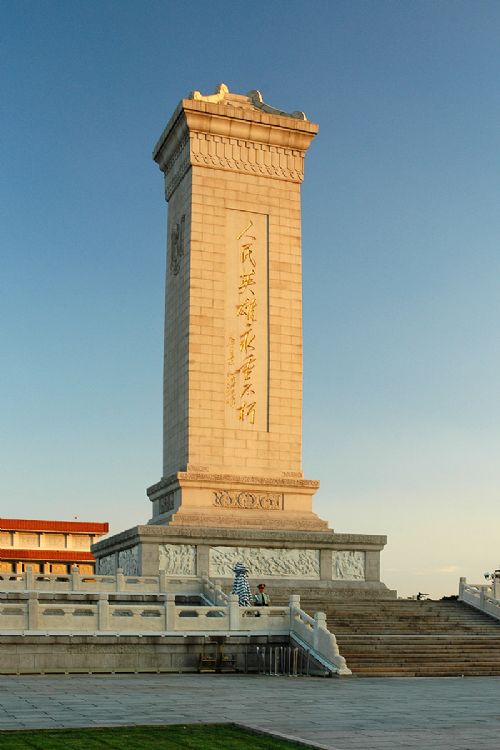 The Monument to the People´s Heroes (Chinese: 人民英雄纪念碑; pinyin: Rénmín Yīngxióng Jìniànbēi) is a ten-story obelisk that was erected as a national monument of the People´s Republic of China to the martyrs of revolutionary struggle during the 19th and 20th centuries. It is located in the southern edge of Tiananmen Square in Beijing, to the north of Mausoleum of Mao Zedong. The monument was built in accordance with a resolution of the First Plenary Session of the Chinese People´s Political Consultative Conference adopted on November 30, 1949, with construction lasting from August 1952 to May 1958. The architect of the monument was Liang Sicheng, with some elements designed by his wife, Lin Huiyin.

The monument has an estimated height of 37.94 metres and covers an area of 32,000 square feet (3,000 square metres)[citation needed]. It weighs over 10,000 metric tons and contains about 17,000 pieces of marble and granite from Qingdao, Shandong Province, and the nearby Fangshan District. 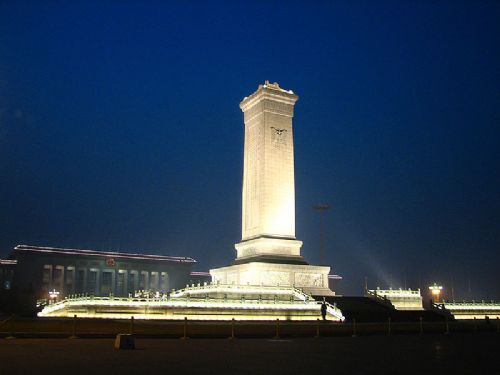 On the pedestal of the tablet are huge bas-relieves depicting eight major revolutionary episodes, which can be read in chronological order in a clockwise direction from the east:

On the front of the monument is an inscription in Mao Zedong´s handwriting, which reads, "Eternal glory to the people´s heroes!" (Chinese: 人民英雄永垂不朽; pinyin: Rénmín yīngxióng yǒngchuí bùxiǔ; literally "People´s heroes forever upright not decayed").