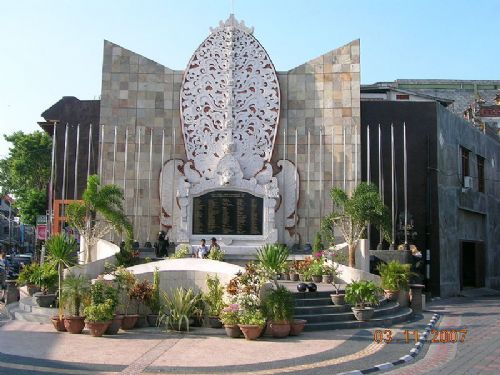 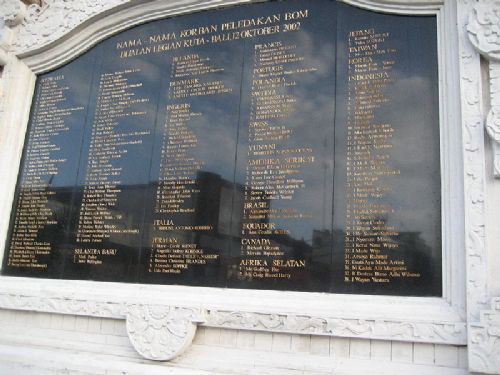 This memorial was erected after the terrorist attacks that killed 202 people in the town Kuta on Bali in 2002.

According to Wikipedia, it was "built on the site of the destroyed Paddy´s Pub on Legian Street. (A new bar, named ´Paddy´s: Reloaded´, was reopened further along Legian Street). The memorial is made of intricately carved stone, set with a large marble plaque, which bears the names and nationalities of each of those killed. It is flanked by the national flags of the victims. The monument is well-maintained and illuminated at night.

The memorial was dedicated on 12 October 2004, the second anniversary of the attack. The dedication included a Balinese Hindu ceremony and the opportunity for mourners to lay flowers and other offerings. The Australian ambassador and Indonesian officials attended the ceremony.

The Balinese mark their commitment in a nine-day long event. After major cleansing ceremonies, establishing a memorial for the lost lives, and paying respect to those who left loved ones behind, the people of Kuta look forward to restoring Bali’s image through an event named "Kuta Karnival - A Celebration of Life”. The community event consists of traditional art performances such as Balinese Sunset Dances, sports on the beach as well as in the water for young and old plus rows and rows of culinary displays along the one kilometre of sandy beach.

The Bali Bombing occurred on October 12, 2002 in the town of Kuta on the Indonesian island of Bali, killing 202 people and injuring a further 209. It is considered the deadliest act of terrorism in Indonesian history. The majority of the dead were foreign tourists, especially Australians and Britons, but nearly one fifth were Indonesian nationals.

A number of Indonesians were sentenced to death for their parts in the bombings and in October 2002 Abu Bakar Bashir, a leader of the Jemaah Islamiah organisation often accused of being behind the attacks, was charged over his alleged role in the bombing. In March 2005, Bashir was found guilty of conspiracy over the attacks in Bali."