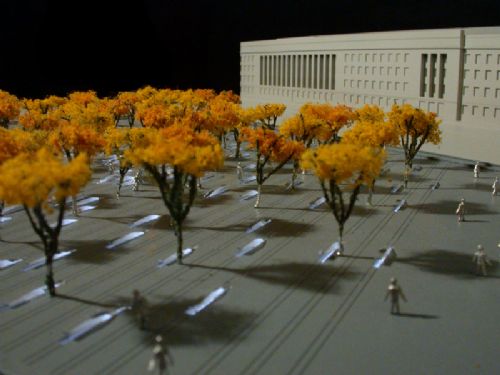 Terry Riley, chief curator of design and architecture at the New York Museum of Modern Art, announced the winning design of the Pentagon Memorial at a Pentagon press conference on March 3, 2003. The winning design is the so-called "Light Benches" submitted by Julie Beckman and Keith Kaseman of New York. The memorial will be built on a 1.93-acre plot on the Pentagon reservation near the spot where the attack occurred on the building. The memorial encompasses the entire memorial site and includes 184 benches with the name of each victim engraved into the face of the bench. The benches are to be comprised of cast, clear, anodized aluminum polyester composite matrix set on an eight-inch concrete pad for stabilization. Each bench will be positioned according to the age of the victim, progressing from the youngest, age 3, to the oldest, age 71. Each memorial bench will have a glowing light pool set underneath. The site also will have clusters of trees throughout to provide shading and a more intimate atmosphere. The estimated cost to build the memorial is between $4.9 million and $7.4 million. Taxpayer funds will not be used for the construction of this project. DoD photo. (Released)
Source: DefenseLink.

All photos are in the public domain. Please visit memorial.pentagon.mil for full information about the memorial.

The five-sided memorial to the victims of the September 11, 2001, terrorist attack on the Pentagon is located in section 64 of Arlington National Cemetery. Appearing in silver raised letters are the names of the 184 victims of the attack. The Patriot´s Day wreath laying ceremony marked the second anniversary of the attack. On this occasion, Secretary of Defense Donald H. Rumsfeld and Chairman of the Joint Chiefs of Staff Gen. Richard B. Myers placed a memorial wreath at the monument in memory of the victims. DoD photo by R. D. Ward. (Released)
Source: DefenseLink

The Pentagon´s America´s Heroes Memorial is dedicated to the 184 people killed in the Sept. 11, 2001, terrorist attack on the Pentagon. The names of the victims are engraved on black acrylic panels inside the horseshoe-shaped memorial. A book containing photographs and biographies of each of the victims is at the center of the memorial under the "United in Memory" seal. DoD photo by Helene C. Stikkel. (Released)
Source: DefenseLink