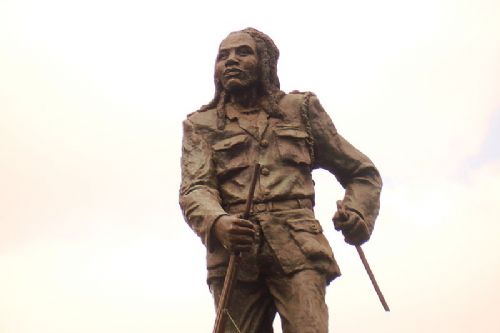 Dedan Kimathi Waciuri (31 October 1920  18 February 1957) born Kimathi wa Waciuri, was a leader of the Mau Mau which led an armed military struggle known as the Mau Mau uprising against the British colonial government in Kenya in the 1950s.

Kimathi is viewed as a national hero by the Kenyan people, and the government has erected a bronze statue of "Freedom Fighter Dedan Kimathi" on a graphite plinth, in central Nairobi. On the anniversary of the day he was executed (11 December), in 2006, the statue of Kimathi was unveiled in Nairobi city centre. Kimathi, clad in military regalia, holds a rifle on the right hand and a dagger on the other, symbolising the last weapons he held in his struggle. This official celebration of Mau Mau is in marked contrast to a post-colonial norm of all previous Kenyan governments regard of the Mau Mau as terrorists. Such a turnabout has attracted praise from Kenyans as a long overdue recognition of the Mau Mau for their part in the struggle for independence.


In the article "Power, politics and public monuments in Nairobi, Kenya" Laragh Larsen writes about this monument:

This statue of Kimathi was the first official monument to the Mau Mau rebellion, the pre-independence war that witnessed horrific torture, the detention of hundreds and thousands of Kenyans, and the deaths of tens of thousands. Official memory of the Mau Mau had been suppressed through decades of state-endorsed amnesia but was finally given a place in Nairobis monumental landscape 47 years after the end of the rebellion, and 50 years after Kimathis death. Mwai Kibaki succeeded Moi as Kenyas third president, and unveiling the Kimathi statue, President Kibaki stressed that his government was committed to honouring Kenyas national heroes and heroines. Rather than the generic (male) hero commemorated in the Nyayo-era National Monument, real heroes, in the sense of named individuals given hero- or heroine-status by Kenyans, were to be identified.