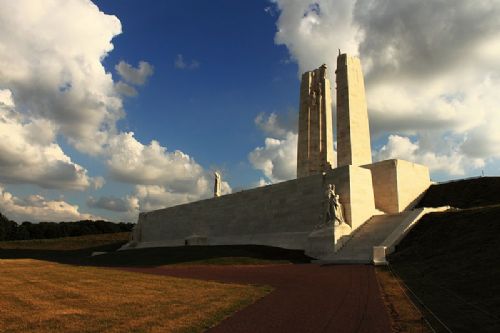 The Canadian National Vimy Memorial is a memorial site in France dedicated to the memory of Canadian Expeditionary Force members killed during the First World War. It also serves as the place of commemoration for First World War Canadian soldiers killed or presumed dead in France who have no known grave. The monument is the centrepiece of a 100-hectare (250-acre) preserved battlefield park that encompasses a portion of the grounds over which the Canadian Corps made their assault during the Battle of Vimy Ridge, a military engagement fought as part of the Battle of Arras.

The memorial took monument designer Walter Seymour Allward eleven years to build. King Edward VIII unveiled the memorial on 26 July 1936, in the presence of French President Albert Lebrun, 50,000 or more Canadian and French veterans, and their families. Following an extensive multi-year restoration, Queen Elizabeth II rededicated the memorial on 9 April 2007 during a ceremony commemorating the 90th anniversary of the battle. The memorial site is one of two National Historic Sites of Canada located outside of Canada and is maintained by Veterans Affairs Canada (the other is the Beaumont-Hamel Newfoundland Memorial).