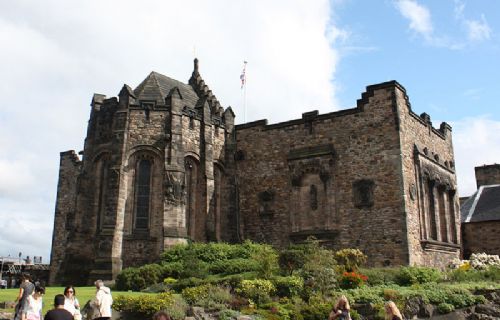 The Scottish National War Memorial is located in Edinburgh Castle, and commemorates Scottish soldiers, and those serving with Scottish regiments, who died in the two world wars and in more recent conflicts. The monument was formally opened in 1927. It is housed in a redeveloped barrack block in Crown Square, at the heart of the castle, and incorporates numerous monuments.

Proposals for a Scottish National War Memorial were put forward in 1917, during the First World War, by John Stewart-Murray, 8th Duke of Atholl, and Capt George Swinton of Kimmerghame. Sir Robert Lorimer, one of the architects involved in the Imperial War Graves Commission, was appointed in 1919, but opposition to a large-scale monument arose from the Cockburn Association and others concerned with the castles heritage. A more modest scheme to remodel the North Barrack Block was finally agreed in 1923, and the memorial was formally opened on 14 July 1927 by the Prince of Wales. After the Second World War 50,000 names were added to the rolls of honour with names still being added from successive conflicts; however, the memorial itself has been left unchanged.