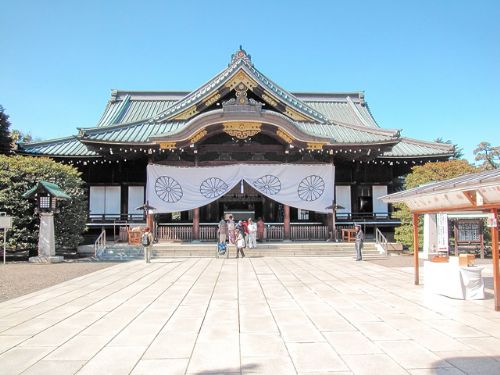 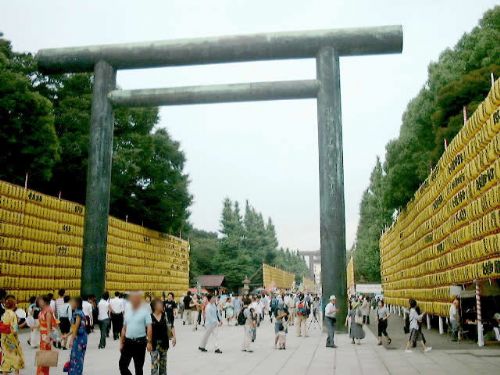 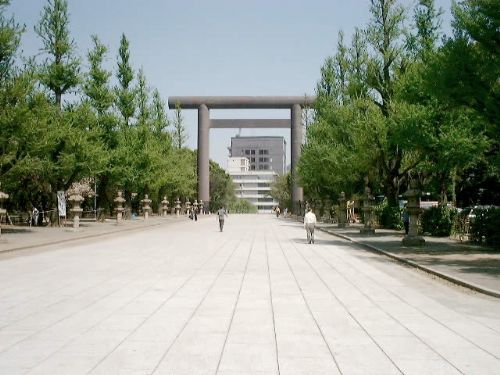 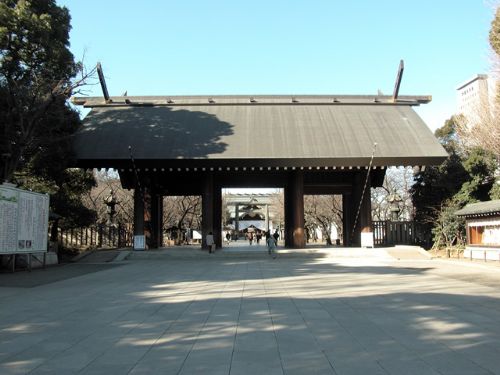 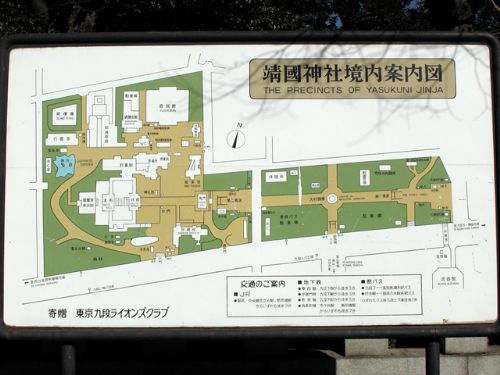 The Yasukuni Shrine (Yasukuni Jinja) is Japans national memorial for all those who died fighting in the wars that Japanese troops have been involved in since the Boshin War in 1867-68. The memorial is highly controversial. In 1979 it was disclosed that 14 class A war criminals had been quitly enshrined at Yasukuni. The annual visit to the shrine by the Japanese prime minister is therefore causing stark criticism from neighbouring countries and foremost by China. More information about the shrine can be found further down on this page. The photographs below shows the main building of the shrine, the road leading up to it, the entrance and a map.

The photographs above were released into the public domain by the photographer under the condition that they are not used for puropses intended to harm the owner of the buildings. The page where the photographs were downloaded from has since moved (www.shihei.com/tokyo_001.html). Click images to enlarge them.


More About the Yasukuni Shrine from Wikipedia:

Yasukuni Shrine (literally "peaceful nation shrine") is a controversial Shinto shrine located in Tokyo, Japan dedicated to the spirits of soldiers who died fighting on behalf of the Japanese emperor.

As of October 2004, its Book of Souls lists the names of 2,466,532 Japanese and former colonial soldiers (mostly Korean and Taiwanese) killed in war. Also honored here are 14 Japanese Class A war criminals, a fact which has engendered protests in a number of neighboring countries who believe their presence indicates a failure on the part of Japan to fully atone for its military past.

The shrine was originally constructed in June 1869 by order of the Meiji Emperor to commemorate the victims of Boshin War. Originally named Tokyo Shokonsha, the shrine was renamed Yasukuni Jinja in 1879. The shrine has performed Shinto rites to house the kami (spirits) of all Japanese and former colonial soldiers (Korean and Taiwanese) killed in conflict since then.

After Japan´s defeat in World War II in September 1945, the US-led Occupation Authorities ordered Yasukuni to either become a secular government institution, or a religious institution that is independent from the Japanese Government. Yasukuni chose the latter. Since that time, Yasukuni has been completely privately funded.

The following is a count of enshired kami (formally saishin, counted as hashira) at the Yasukuni Shrine.