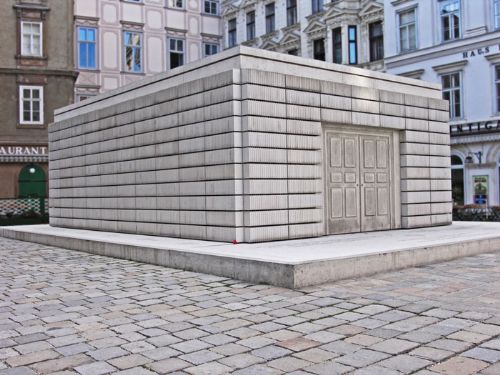 Whiteread’s casts often seem to emphasise the fact that the objects they represent are not themselves there, and critics have often regarded her work to be redolent of death and absence. Given this, it is perhaps not surprising that she was asked by Austrian authorities to create a work in remembrance of Austrian Jews killed during the Holocaust. Due to political sensitivites and bureaucracy the process, from commission to unveiling, took five years [10].

The work turned out to be Holocaust Monument (2000; also known as Nameless Library) and is located in the centre of the Judenplatz in Vienna. It is a work in cast concrete, with the walls made up of rows of books, with the pages, rather than the spines, turned outward; this can be regarded as a comment on Jews as a "people of the book" and the Nazi book burnings [11]. On one of the walls is the negative cast of double-doors.