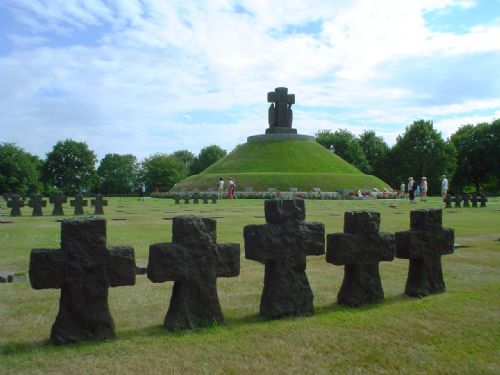 La Cambe is a military war grave cemetery, located close to Bayeux, France. Presently containing in excess of 21,000 German military personnel of World War II, it is maintained and managed by the German War Graves Commission.

La Cambe was originally the site of a battlefield cemetery, established by the United States Army Graves Registration Service during the war, where American and German soldiers, sailors and airmen were buried in two adjacent fields.

After the war had ended on the continent and paralleling the work undertaken to repair all the devastation that the war had caused, work began on exhuming the American remains and transferring them in accordance with the wishes of their families. Beginning in 1945, the Americans transferred two-thirds of their fallen from this site back to the United States while the remainder were reinterred at the new permanent American Cemetery and Memorial at Colleville-sur-Mer, which overlooks the Omaha Beach landing site.

Because of the pace of the war, the German war dead in Normandy were scattered over a wide area, many of them buried in isolated field graves - or small battlefield cemeteries. In the years following the war, the German War Graves Commission (Volksbund Deutsche Kriegsgräberfürsorge) sought to establish six main German cemeteries in the Normandy area.