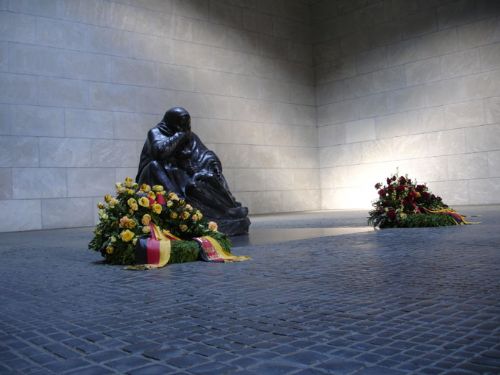 
The history of the Neue Wache (The New Guardhouse) goes back to 1816 when Friedrich Wilhelm III. commissioned Karl Friedrich von Schinkel to design a guard house to accomodate the Royal Palace Guards. The resulting romantic classicist building was at that time not at all considered to be a memorial och to commemorate victims of war. It was first in 1931 that the Preussian Government made Neue Wache into a memorial for the fallen soldiers in the first world war and placed a sculpture by Heinrich Tessenow in the middle of the building.

In the end of the second World War the building was severely damaged by bombs but was restored 1960 in the DDR era as a "memorial to the victims of fascism and militarism". In 1969 it became the burial place for an unknown german soldier and an unkonwn victim of the holocaust.

In 1993 the German chancellor, Helmut Kohl, declared that the Neue Wache including a sculpture by German artist Käthe Kollowitz titled Pietá was to become the a part of the "Zentrale Gedenkstätte der Bundesrepublik Deutschland" (central memorial of Germany) which meant that it would be the national memorial for the victims of World War II in Germany (It is called "The Central Memorial of the Federal Republic of Germany to the Victims of War and Tyrrany"). This decision was not uncontroversial, especially for the jewish community, but also for nationalists and conservatives.